The average price of housing </ strong> in the country does not stop rising according to reports and studies that have been made in recent months. This happens in big cities like Madrid </ strong>, where the prices of flats </ strong> in some areas, are already at the level of the highest values ​​registered in the boom, such and as explained in the analysis of urban Data Analitycs (uDA).

Certain areas of the capital place the house prices </ strong> with the same values ​​as a decade ago, when the cost of houses already reached their historic peak.

In the more central apartments in the districts such as Centro or Salamanca, they only cost 2.5% less than in 2007, as verified by uDA. In the neighborhood of Justice, this percentage is reduced to 1%.

The information offered by uDa calibrate the interannual increase in the value of the home. The Index of the Household Price </ strong> (IPV) of the second quarter of the year of the INE (National Institute of Statistics), shows an increase of 5.6%, the index of Tinsa </ strong > August, reports an average increase of 4.7% nationally and Tecnocasa </ strong> notes that the value of used floors rose during the first half of the year by 8.2%.

After all this, misgivings have begun in the lawsuit. And it could not be otherwise. This is due to the increase in the price of the home </ strong> and the approximation of the price of the houses to the levels that occurred during the bubble in different areas of Madrid. </ Strong>

The problem is that comparators do understand why this solid appreciation of apartments </ strong> is given, since the purchasing power of the majority of citizens is still growing.

The market moves at different speeds </ strong> </ h2>
José García Montalvo, Professor of Economics and coordinator of the XXV Report on the housing market of Tecnocasa </ strong>, introduces another capital variable when talking about prices: the “enormous polarization” of the housing market </ strong>, which makes the activity concentrate on certain sites.

We know that the sector advances at different speeds at the national level, it is even variable within the same city as it is happening in Madrid </ strong>. This is also something that is revealed in the current analysis of uDA. </ Strong>

Carlos Olmos, director and founder of uDA, explains that “the behavior of the market in Madrid </ strong>, unlike in Barcelona, ​​is very heterogeneous”. “It should be noted”, he continues, “in the capital there are still 25 neighborhoods, out of a total of 128, which register an interannual decrease in prices, while in 20 others they grow more than 15%”.

uDa has calculated between the current value of the houses and the peak that occurred in the years of the bubble, from the perspective of buyers and sellers. In this way you can locate the point where the housing market </ strong> is in each of the neighborhoods of the city.

Olmos says that “this variable, although it does not indicate the maximum future prices, it does give an idea of ​​the dynamism and evolution of the price in each enclave. In areas with prices close to those of the boom </ em>, it should be considered that, even though it may be upward, the price ceiling may be close. On the contrary, in the districts of Latina, Carabanchel or Fuencarral- El Pardo </ strong>, where the current price is far from the maximum, it can be interesting to buy “.

Prices stand out in Justicia (-1%) and Almagro (-5%), since they are the closest to the pre-crisis level. Neighborhoods such as Entrevías, Palomeras Bajas and Amposta </ ​​strong>, have values ​​still 60% lower than the highs of 2007. Seeing this difference between prices, the time has come to ask why this evolution occurs in the prices of the capital. Experts say the answer lies in the high heterogeneity of the market.

Currently there is a real estate standardization </ strong> and mortgage that is placing each neighborhood in its place. Everything opposite to what happened during the bubble: the difference between the neighborhoods narrowed greatly challenging the equilibrium of the market.

According to José Luis Ruiz Bartolomé, the consultant and partner of Chamberí Asset Management, the key is in the purchasing power of demand. He adds that “they are neighborhoods with a natural buyer with a sociological profile that does not fit the middle class. On many occasions, they are foreign investors on a transnational scale. “ 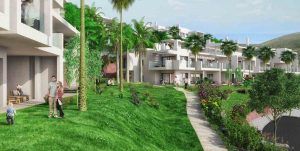 LANDSCAPING: AN ARCHITECTURAL TREND IN AUGE